“Exchange information, learn to talk sensibly about any subject, learn to express your thoughts, accept new ones, examine them, analyze. Think objectively. Think toward the future.”
Anne McCaffrey: The Dragonriders of Pern

Okay, Alunaria, here I am posting my best Argus screen shot. It is from the tent of the pet tamer Crysa in the Northern Barrens! 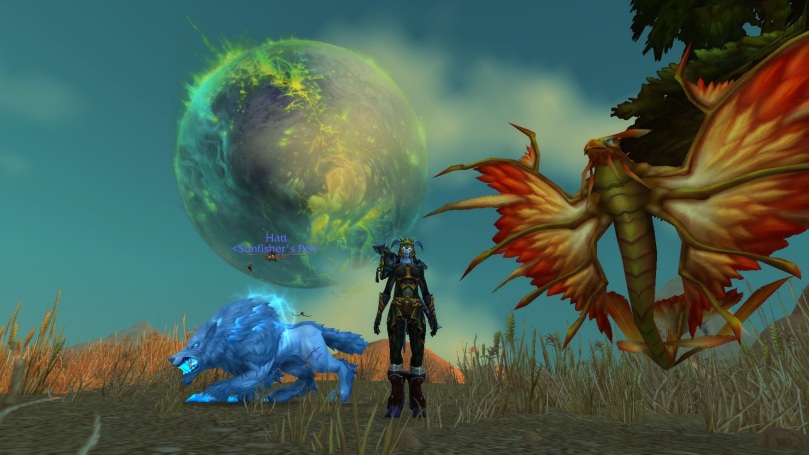 For me, the best source of information is on Icy Veins’ News Hub which they are keeping up-to-date. You can scan the topics and no see spoilers and then, if you wish, click and see the information. I looked at their “how to get to Argus” because I don’t want to get lost!

This patch will be huge and gigabytes are on the background loader pouring the patch into my computer right now.

We will be “ground bound” once again. In my eyes, the designers got their way. I agree with them that the best experience is on the ground with the camera zoomed in to appreciate all of their artwork. The designers need to talk to the game-play guys who send us to the same place over and over and over again.

No flight paths on Argus. It is all portals and our first job will be to unlock all of the many (many) portals on the new planet. I like it because it is different. The Old Grump in me likes the flight paths because you can see things from the air that might pique my interest. And so … I hope the Goblin Gliders work and I can jump off the space ship and make it to dirt.

There is a lot of stuff going on. This is really good. It is a mini-expansion.

When it comes to fishing, I believe that we will have dailies from several different Fishing Trainers around the planet. Each guy will have a rep reward, I think? And, I would guess that they count as World Quests. Cool, no? The Old Grump in me really liked the WotLK dailies that gave XP as part of the leveling process: not end game.

I hope that bloggers continue to write about what they discover on Argus. I have this tiny fear that I’ll miss something obvious. So much is being added, for example, I know that Engineering gets two new recipes — from where? Or, what if there is a new look for the Underlight Angler or or or … there is simply too much stuff packed into this patch!

Wrathion, Jaina, Anduin; where are you?