“Make foes of bowmen if you must,
Never of penmen.”
Tiruvalluvar

Here at the end of an expansion all of the many systems designed for this expansion must come under question. By this I mean, we (really me) got into the habit of running certain things on a daily or weekly basis to earn the end reward. Some rewards appear to be ongoing, like AP, even though the steps earned are really small.

I’m pretty much done with the Horrible Visions. I liked them well enough to earn the rewards in the designed game but to do them on a lark is not for me. So, now I look at my only two characters that have done the cloak business and I see that I’m collecting but not spending: 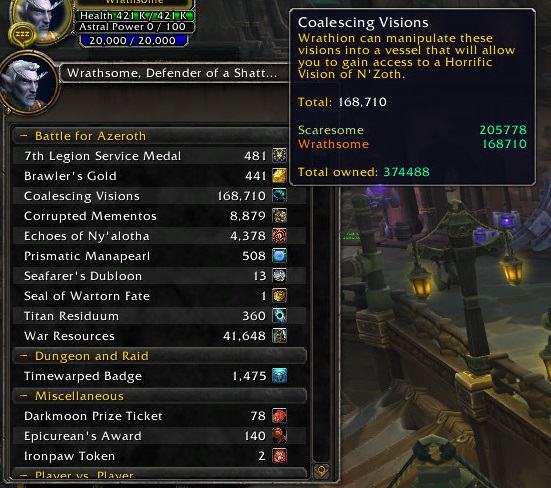 Not watching what you are doing will leave you holding a bag full of stuff. I have forgotten what Nethershards and Apexis Crystals and Timeless Coins buy, but I can see that I spent a lot of time at some point collecting but not spending: 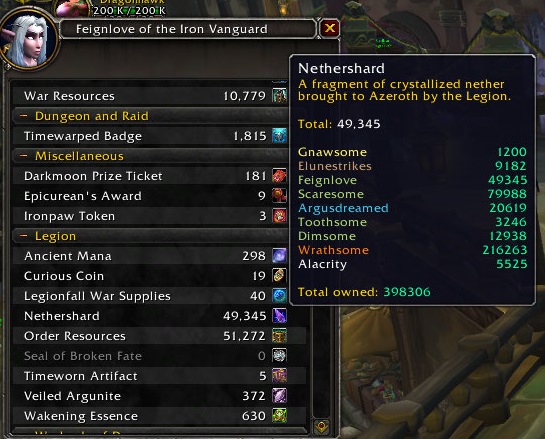 No one will tell us exactly when the next expansion will arrive. The smart people that I know have predictions that are very different from each other. If we did know, then we’d be able to time our activities; like for a raider like me, when would I stop gathering herbs to make flasks so that I’m not stuck holding a ton of materials that I don’t spend.

In about fifteen minutes, the weekly reset will happen. I intend on doing the major assault for the gear reward (as I have said before, the odds are astronomical that I’ll get the piece that I want). I’ll gladly do it just for the chance, it is kind of fun to fill the bar. But, I could easily not do it — it is time to rethink what my rhythm of play has been and adapt it to the end game times.