“Constant use had not worn ragged the fabric of their friendship.”
Dorothy Parker

I had a neighbor who moved away a few months ago. She was a die-hard Trump fan from Texas. Passionate, angry, defensive; she was furious that she was losing friends and she was fighting back by deleting people on her friends list on Facebook. Like I said, she moved away and I’m sure she never thinks of me, a neighbor who chatted in passing.

I think about her now and then.

Do you ever wonder if there are people out there who think about you while they are long gone from your own mind? What are they remembering?

Last night we downed N’Zoth! Attendance was high because this would be the night of “the kill”. We had our Vantus runes and did runs and wipes learning the fight and our roles and duties.

It is one of the better designed fights in my opinion. Once you enter the final stage, you are almost sure of the kill. No very nasty mechanic in the twelfth minute of the fight. For this fight, you know that you are failing early (enough) on and players can jump off the edge and suicide to save the repair bill. And once you enter the final stage, you stack and focus and get the goods.

There is nothing very hard in this fight except for two things. One is the Paranoid phase where you have to race to your buddy and stand by him or her. The second is that the raid has to split. Dividing the raid team on two different realms puts the onus on each individual player to perform.

For a cynical and tired raid team, we celebrated! We all collected our new mounts and went down to the Goldshire Inn to park on the roof and show off our new mounts. That was pretty fun with much laughter.

Then, just outside Stormwind, we made a circle of our new mounts so everyone could get a screen shot of our victorious moment.

I’m glad that it is over. And we are sure to return for more of the same, probably with Alts. There is hope for an Achievement Run on Normal at some point. But we are sure to lose some players now that “the kill” has been successful, for them there are other games to play and activities to do in this game. 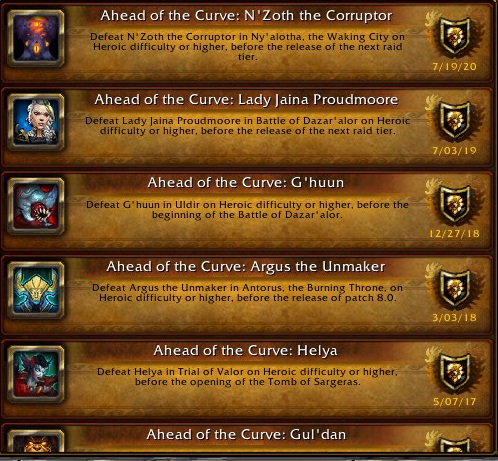 The achievement goes on the Feats of Strength list. The glaring and bitter missing one is the Eternal Palace – that is when everyone was leaving WoW and raid teams were falling apart and we called it quits until the next patch came out.

So, my friends, done and done!