“Never go to a doctor whose office plants have died.”
Erma Bombeck

Darkshore: The Day After

Kudos, props and praises to the terrific bloggers on the World of Warcraft. We are blessed to have some writers who are steeped in lore and also have gaming perspective. Personally, I’m blown away at the level of talent that doesn’t always have a chance to be displayed until events like the recent quests.

As ever, Alunaria is powerful in When There Are No Words, the little Orca in the ocean looking up at the fires was very moving and terribly sad.

I see that one newsfeed, MSN, has an article called World of Warcraft’s latest story campaign has ignited the fan base. Skipping past the “ignited” it is pretty well written and might even catch the eye of my brother and sisters who do not play the game.

And, really, what else is there to talk about?

Our last raid was Tuesday. Our tanks were taking a beating on the heroic dogs and we failed twice. I decided to go “full on tank heals” to see if we could get through it: Cenarion Ward, Stonebark and Photosynthesis. It worked! Photosynthesis is like a mini-game; on yourself to speed ticks on Rejuve or over to the tank so that he can cook along with extra heals. I hope that this is not our default raid build, it is hell on our throughput but no one knows just how weak our tanks will be in BfA.

Looking over the BfA Toy Box Guide on Wowhead, I don’t see any or many toys that make you sparkle and shine and lend themselves to great macros. I’ll have to look again and hope for more such toys down the road. I mean, one can only put so many campfires on the ground.

Wowhead’s Where to find BfA battle pets is way too dense and heavy for me. It is worth bookmarking. My strategy will be to collect a whole bunch of new pets and then go back to find the one’s that I don’t have. Then this guide will be useful to me.

I got Exalted with the Gelkis and Magram Centaurs last night. I had done the Desolace quests before but it was during the Burning Crusade and they had reset. So, I had to do the tedious entry quests but, in all, not so bad.

Honestly, at some point in the next two weeks … I need to clear out my bags! 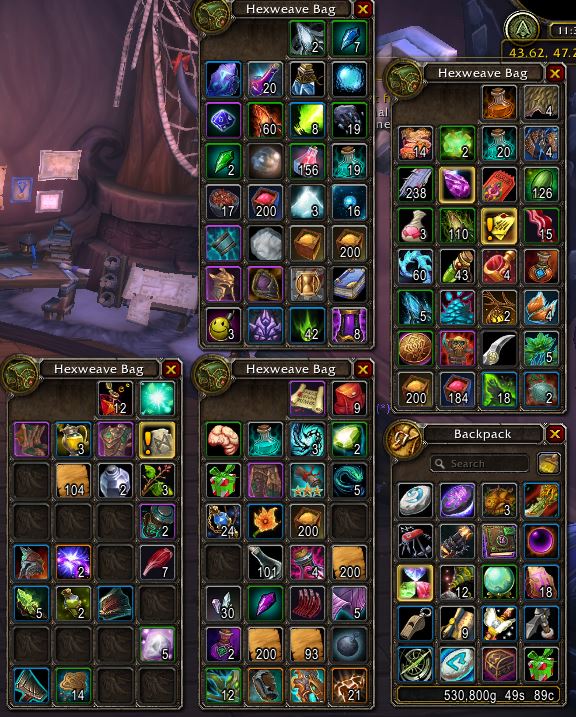 4 thoughts on “Darkshore: The Day After”